Adventures with Alpha: The Thrill of Gimmick Decks

by Stephen Menendian on August 17, 2022 in Articles, Old School Magic

My pandemic-induced journey in to the Old School subculture of the #AlphaCult has led to many joyous experiences and delightful insights, but perhaps none as illuminating as the possibilities of breaking the 4-card limit in a constructed format.

The 4-of-a-unique-card limit was a formative rule for constructed Magic issued on high with the first mandatory tournament rules, along with 60 card minimums and 15 card sideboards. Together, these rules create a kind of “speed limit” for Magic, even more fundamental than Banned and Restricted Lists. They interact to minimize or constrain the ruthless consistency that a big baller, high rolling deck can attain, creating a diversity of gameplay that helps make Magic an enjoyable experience for continued replayability. Magic would not be nearly as enjoyable if every game were the same, especially between the same decks. But these rules also permit a certain degree of consistency in game planning and play, such that decks are not just a completely random agglomeration of powerful cards, but can actually constitute “strategies.”

The 60 card minimum and 4 card maximum was a brilliant balancing of these elements, replayability and consistency, that has helped Magic endure for decades. Some forces have pushed constructed Magic towards greater consistency, including, but not limited to, the mulligan rules (and especially the London mulligan), the massively expanded card pool with many functional variants or copies of existing cards, and the greater efficiency of deck manipulation (especially with the advent of cantrips and fetchlands).

While hyper consistency may be undesirable for some facets of constructed Magic, it is worth remembering that the original formulation of the game contained only a 40 card minimum, and no individual card maximums. The real constraint was a very small card pool (Limited Edition, Unlimited Edition, and Arabian Nights), and card availability. Richard Garfield and his playtesters assumed that ordinary players would make do with a very limited card supply.

But in this original equation, card rarity loomed much larger than it does for competitive constructed Magic today. While players might have few rares, they might have several or even many copies of key commons. An examination of the Limited Edition set reveals this design intent. Plague Rats, most obviously, is non-functional in a context of 60 card minimums and 4 per card maximums, but is hilarious and brutal in a 40 card minimum environment where an opponent may have a dozen or so Rats.

More obscurely, mechanics like Banding, where are featured on just three creatures in Limited Edition, Benalish Hero (a common), Mesa Pegasus (a common), and Timber Wolves (a rare), makes very little sense outside of the context of rarity. The Banding mechanic tends to rely on having all but one of your creatures with Banding. Thus, it rewards deck design that includes mostly creatures with Banding. Since Timber Wolves is a rare, that’s nearly impossible to accomplish unless you have ample copies of either Heroes or Pegasi to work with. Out of a set of roughly 300 cards, the inclusion of Banding as a mechanic only makes sense if the designers thought that some players would be able to play many banding creatures out of those two commons.

Even less obviously, but no less important, is the fact that many key creatures are common or uncommon. There are many odd and marginal cards in Limited Edition. If the designers thought that cards would be roughly equally accessible, then the distribution and density of creatures is grossly insufficient. But the designers assumed that players would play many more Scryb Sprites than rares like Thoughtlace.

In short, it is not simply that unique 4-card caps did not exist, but if they had existed at the time Limited Edition was released, they would have rendered large swaths of the set unplayable in 1993. Instead, rarity served as a soft cap, allowing players to accumulate far more commons than rares, while preserving the design intent of the set.

Wonderfully, Alpha League rules mimic and approximate this dynamic nicely, sharply constraining rares to 3-copies per card (unless restricted or super-restricted), uncommons to 6 copies per deck, with no limit on commons. This creates a small space to explore what I call “gimmick decks” in the Alpha League, a design space generally that does not exist anywhere else in constructed Magic (although, on occasions, can occur in Limited contexts, which obey the original rules of Magic: 40 card minimums, and no unique card caps).

A “gimmick deck” is a deck that is designed around a large quantity of a single or few cards. A great example is a deck I profiled last year, Joel Mick’s Alpha “Elves.” 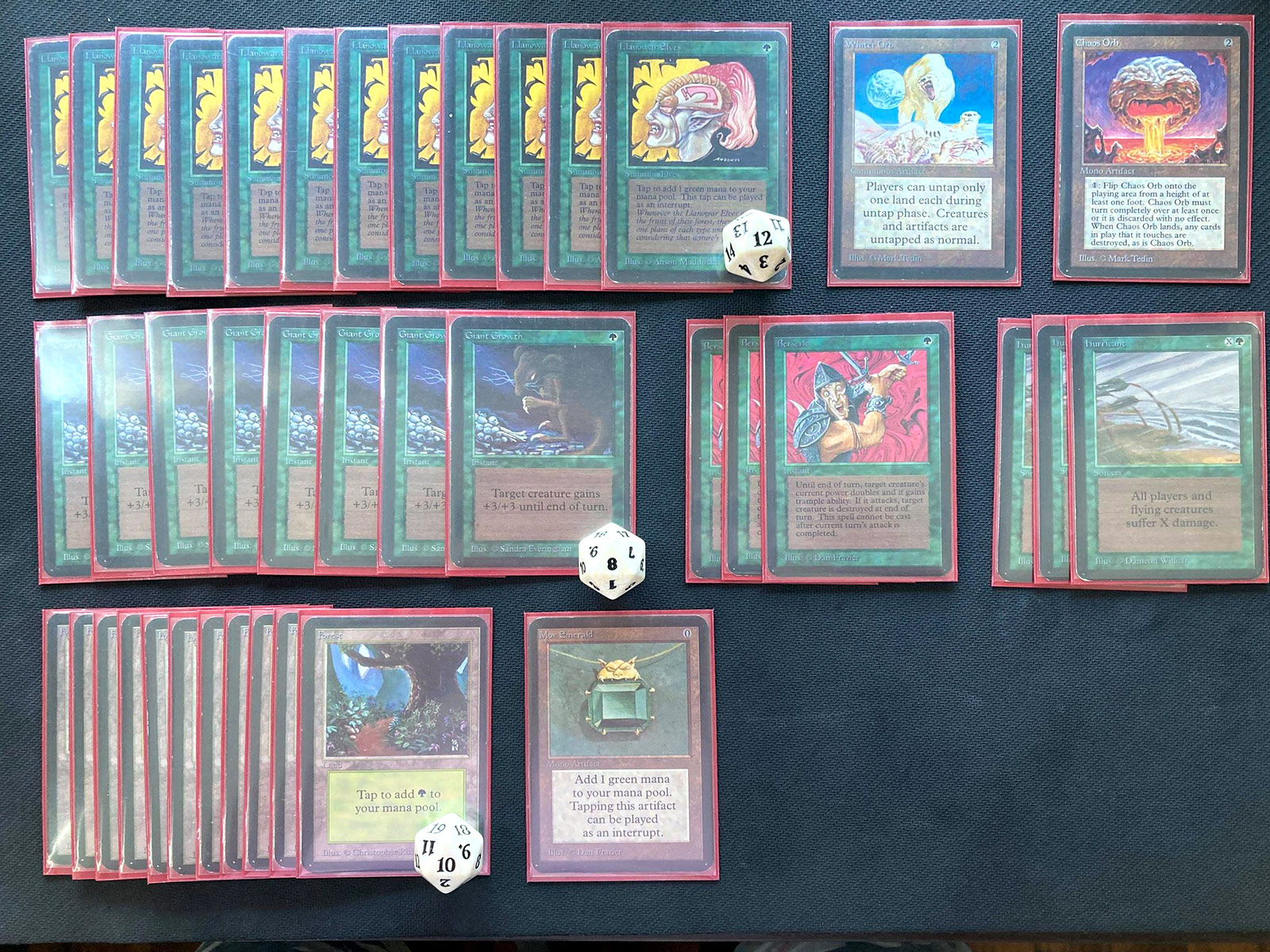 At its essence, this deck is just three unique cards: Forests, Llanowar Elves, and Giant Growths. This deck is fast, brutal, and fun. On the first turn, you play an Elf. On the second turn, you play two more Elves. On the third turn, you could play 6 Elves, but instead you are probably attacking with some.

Probably the most powerful gimmick deck built for the League has been the Orcish Artillery combination decks, which run about 10 copies of the Artillery (this was prior to the institution of a 6-card cap for uncommons), and a half dozen copies of Circle of Protection: Red. 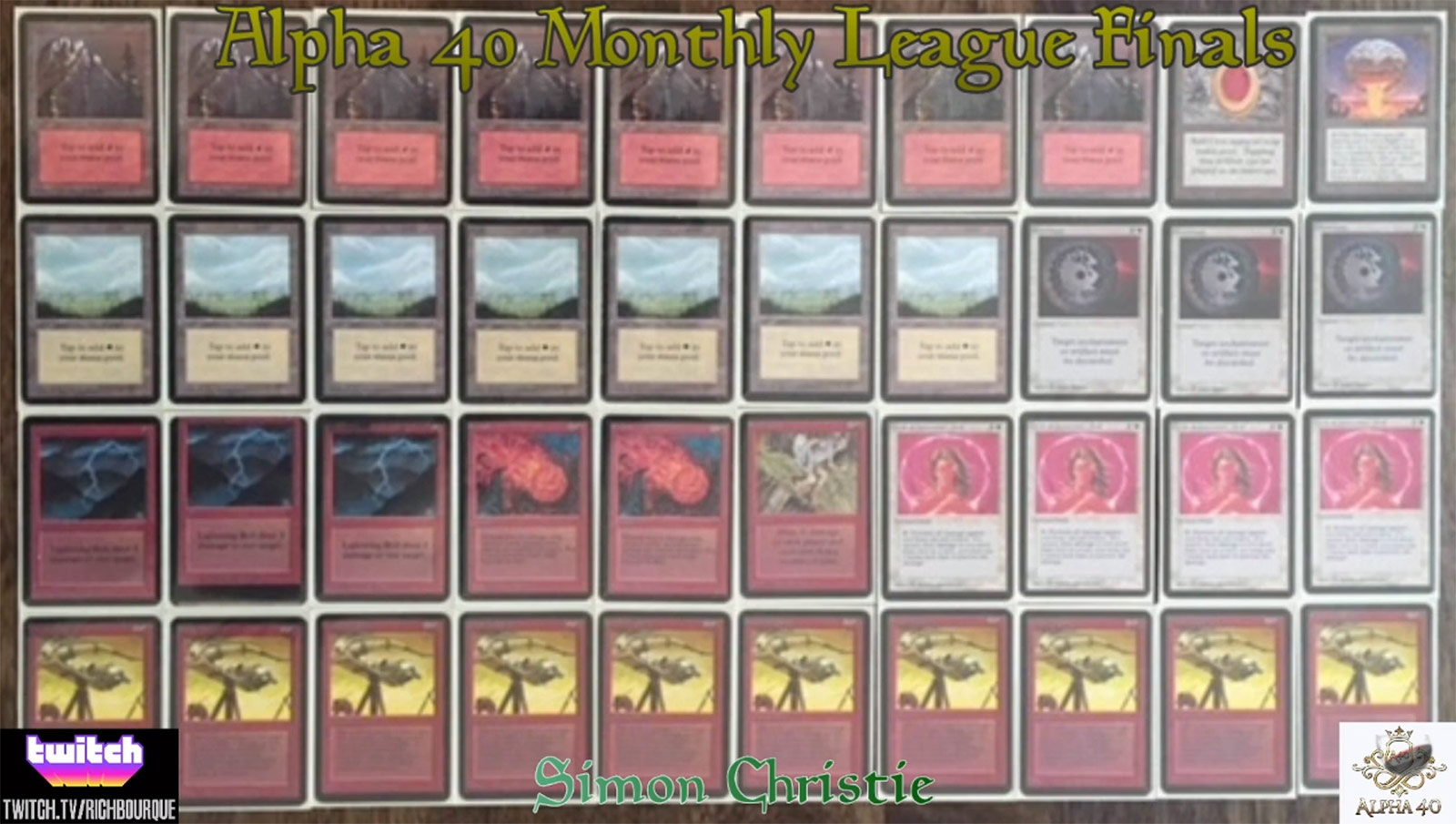 Another one of my favorite examples, that is probably underappreciated outside of the Alpha context because its power is more subtle, are the Psychic Venom decks. Psychic Venom was clearly a menace in the early days of Magic, especially when combined with tapping effects like Icy Manipulator, Twiddle, or Power Sink. Load up an opposing land with 3-4 copies of Psychic Venom, tap it with Icy repeatedly, and see how long the game lasts! 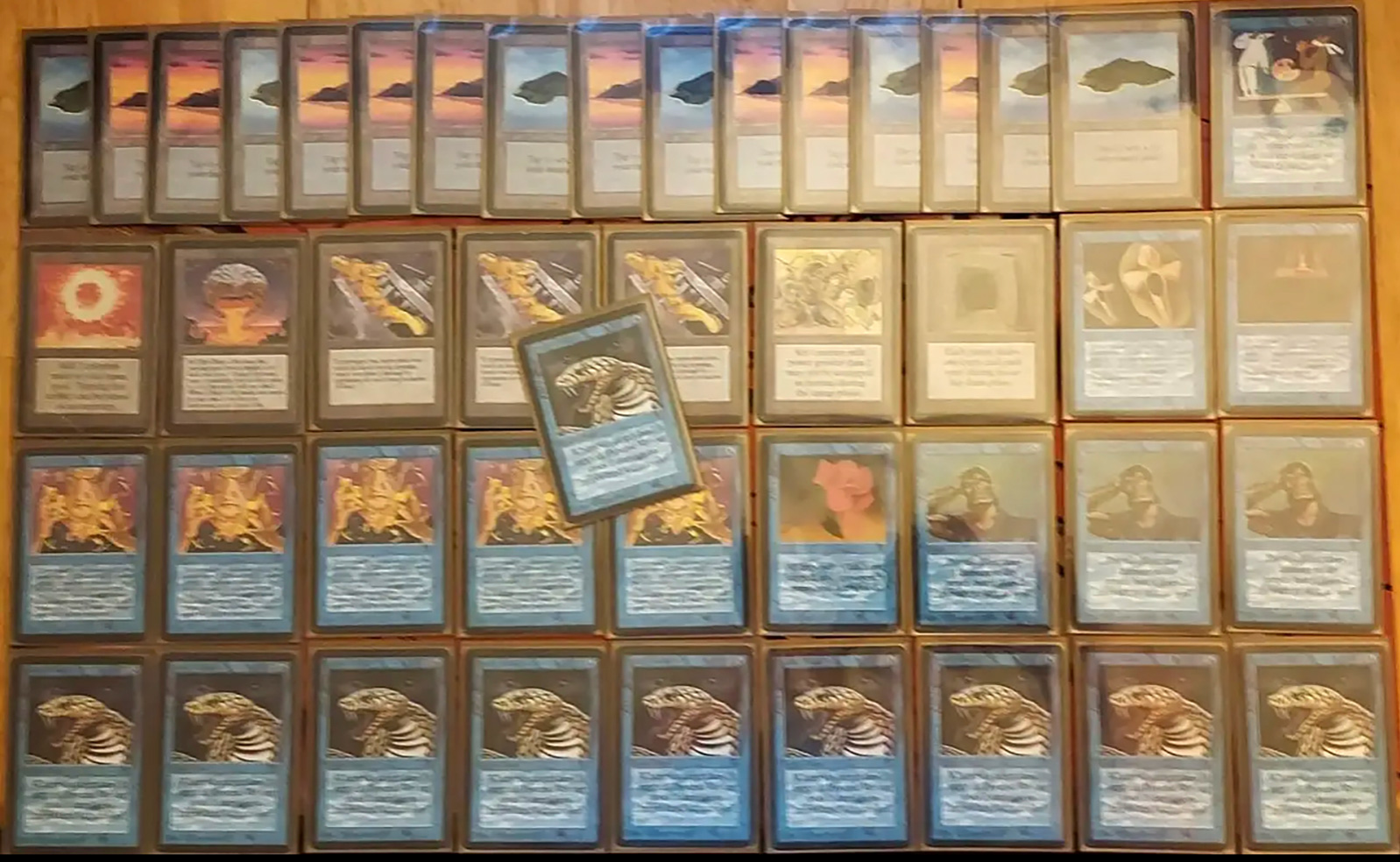 But probably the most obvious examples are the Plague Rat and Benalish Hero decks. 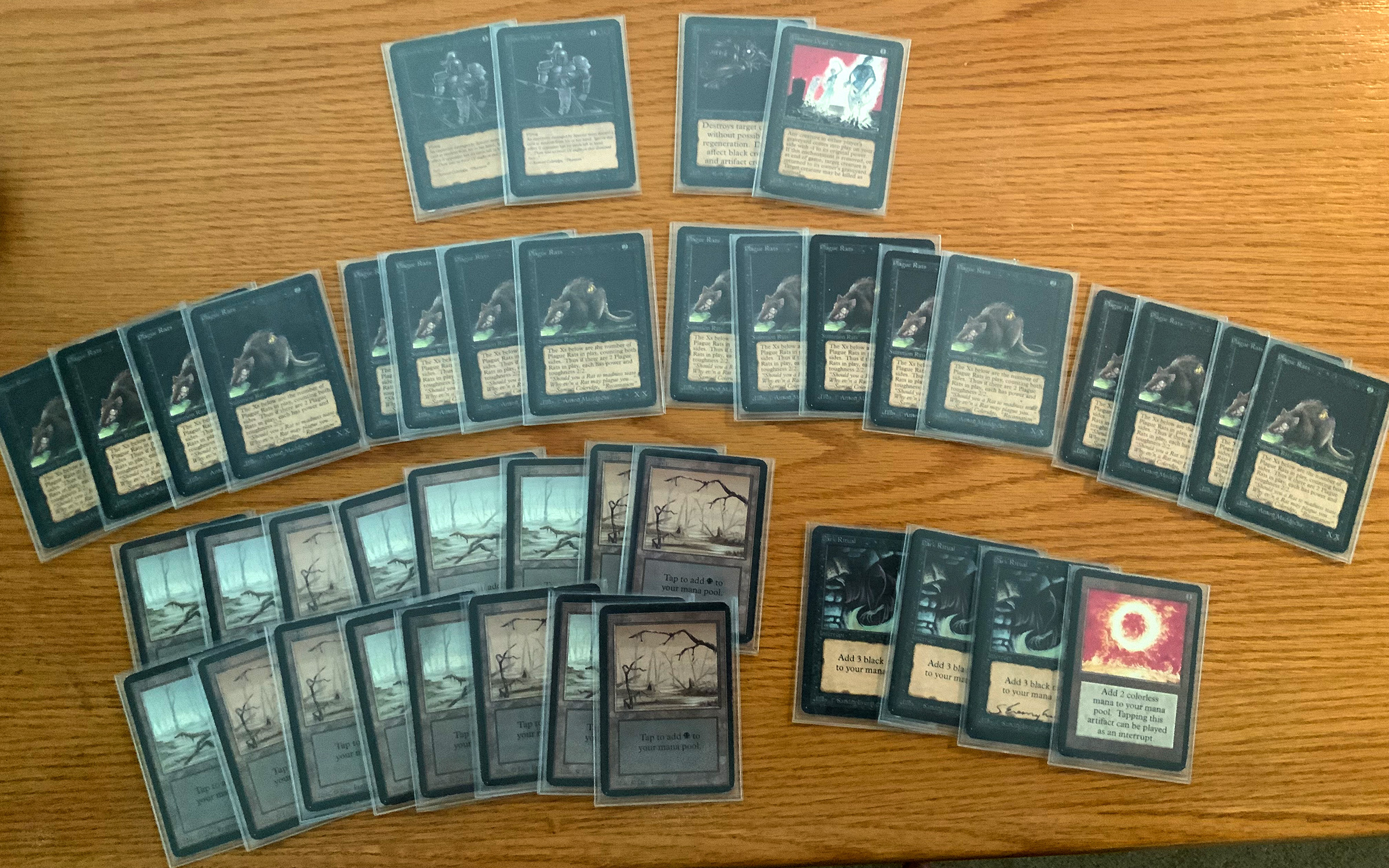 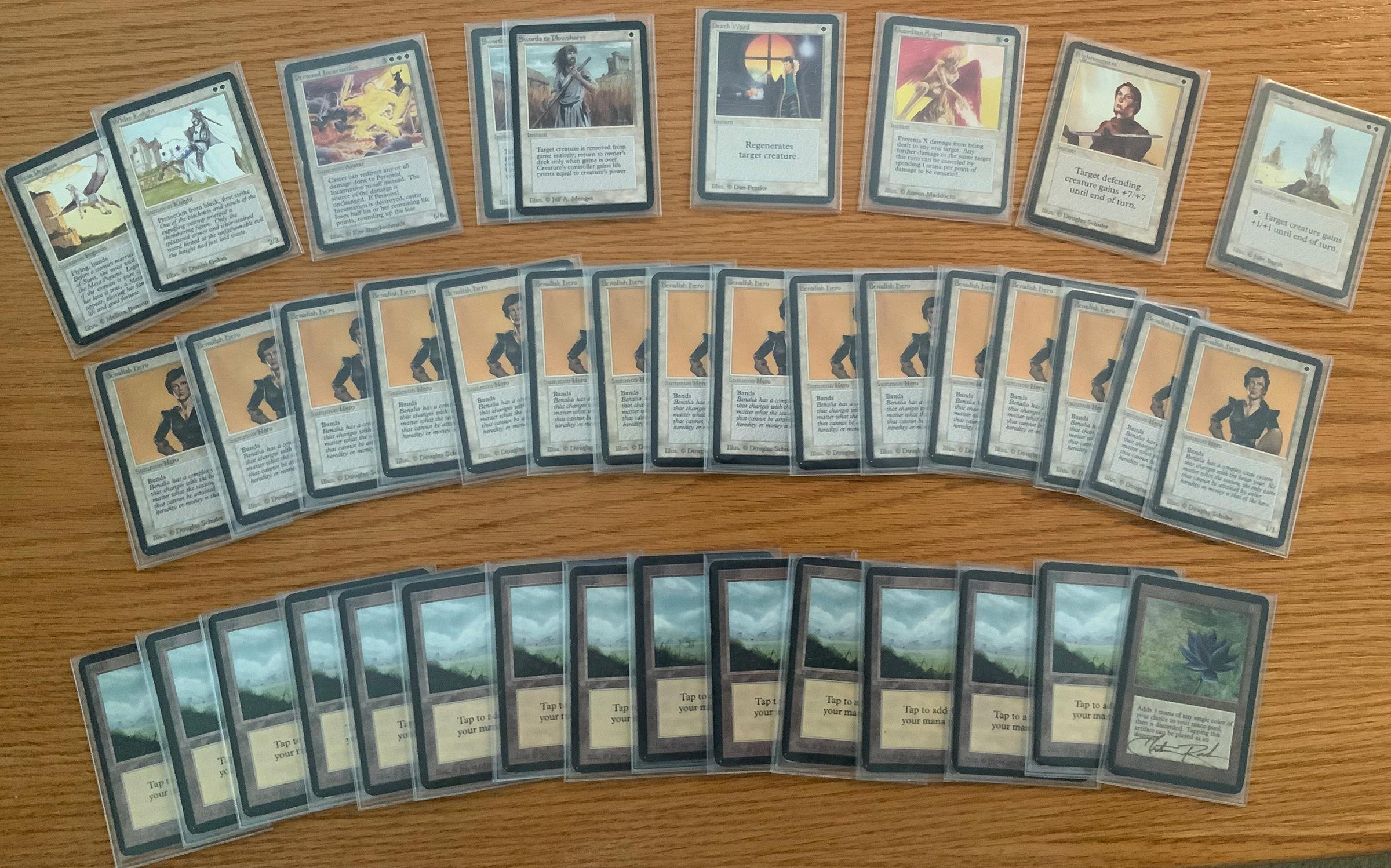 What these decks wonderfully represent is a deck concept distilled to its core essence; no frills, fluff, or filler. But even more intriguingly, they raise questions about which kinds of linear strategies trump others, under what conditions or circumstances, and with what amendments can those outcomes shift.

For example, which strategy is strategically superior in a match, the Plague Rat deck, or the Hero deck? One could theorize and speculate (and believe me, I did!), but it is not until you build the decks and test them that the insights begin to flow.

In theory, the Hero strategy has a huge advantage of being able to deploy itself much more quickly than the Rat deck, which, in simplistic form, casts the first Rat on turn 3. But the Rats grow much faster, at an exponential rate, suggesting that, if the Rat deck can stabilize, it should be able to Alpha strike eventually.

But even this simple assessment belies some considerable complexities, which is what makes this experiment so interesting. For example, at what point, generally speaking, can the Plague Rat deck shift from defense to offense? And since the Hero deck is faster out of the gates and presumably can inflict some significant damage before the Rats are much use on defense, if the Plague Rat deck does eventually shift to offense, must it hold some of its forces back, and if so, how much? When the Plague Rat deck begins attacking, how much of the Hero army must be held back on defense, and at what cost?

These are simple questions that elude simple answers. But they reveal much more about the fundamental nature of the game of Magic than just two Alpha League decks paired up might imply. They begin to provide fundamental insights into the dynamics of Magic matchups, the relative value of speed versus consistency, how minor tweaks can produce large outcome differences, and suggest the rudiments of a metagame (e.g. what happens if we add cards like Northern Paladin or Black Knight?). Add in other decks into the picture, and the complexity multiplies.

In late July of 2021, I finally had an opportunity to explore these questions when a friend visited with me, and we played these two decks I put together just for this experimental purpose.

We played about a dozen games, and the dynamic became fairly clear. The Hero deck did indeed drop quick Heroes, but the damage did not stack up as quickly as I expected.

And that’s with a generally perfect draw.

And, once the Rat deck got 4 Rats in play, it threatened an imminent lethal strike. The incremental increase from 4 to 5 Rats is a leap of 16 to 25 damage on board. Putting an entire Band in front of just one of the Rats meant death from the other 4 with 20 points of damage. And in contrast to the Rats, more Heroes provided no significant left to the larger Hero band. Once the Hero deck mostly emptied it’s hand by turn 4 or so, then its luck was spent. 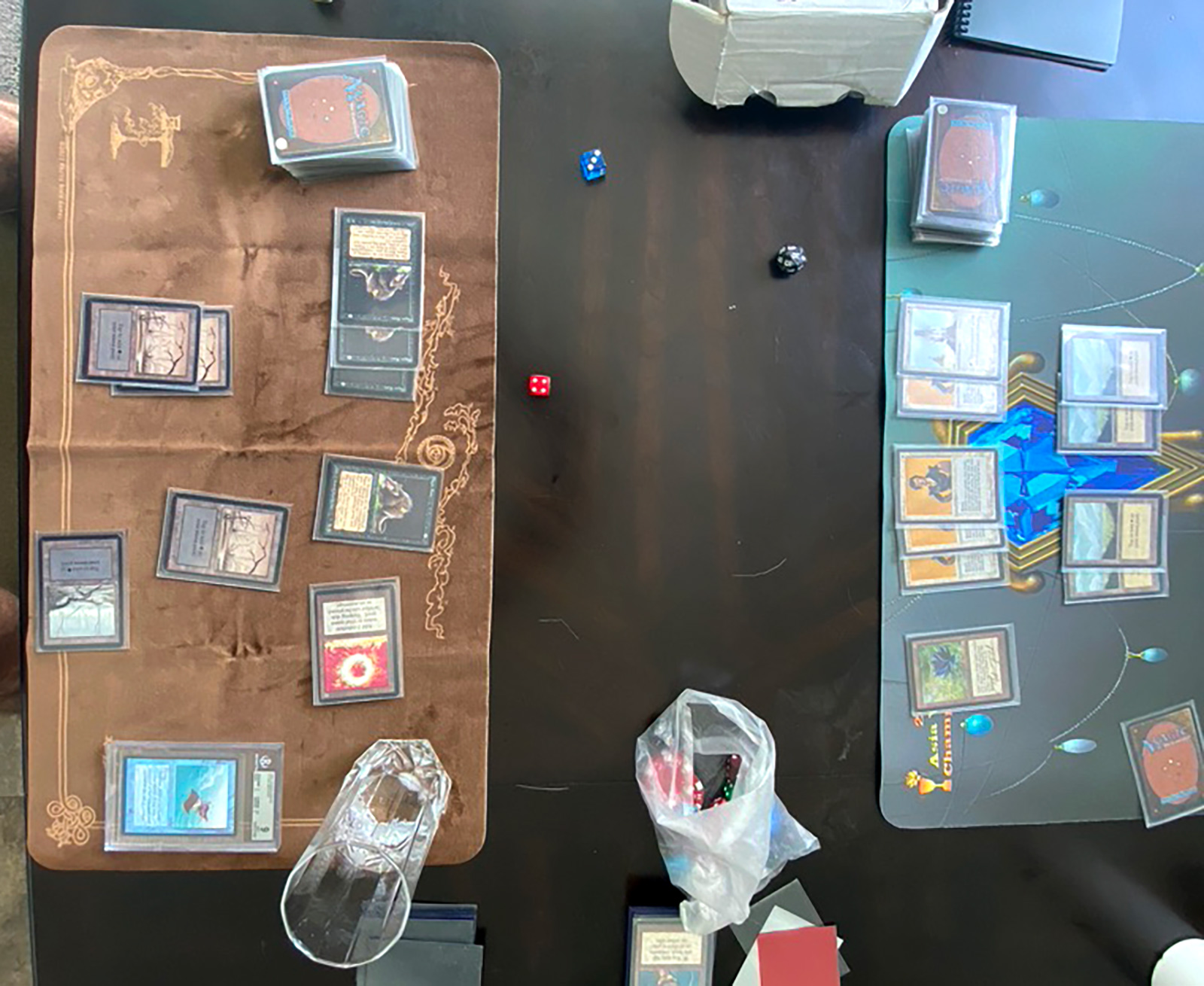 In addition to being faster out of the gate, the Hero deck also had one additional significant advantage over the Rats: it could operate well off of a single land. The Plague Rat deck would stall out on just one or two lands. It desperately needed to hit three land drops, even with a few Dark Rituals to help. At the same time, the Hero deck required fewer lands, which meant that the Rat deck was more likely to get mana flooded (by virtue of needing to build with more lands in the deck). This meant that variance slightly favored the Hero deck, which gave it a non-trivial percentage of game wins in the match.

In general, I got the impression that the Hero deck, in a streamlined design, won about 40 percent of its games against the Rats. But I also got the impression that small adjustments could easily tip the balance. For example, Pestilence would be an unbeatable trump against Heroes, wiping out the entire army at once. While I felt that Crusades would be a massive boost for the Heroes, accelerating the clock and helping even up the mid and late game. And spot removal, like Swords to Plowshares or Terror, would introduce considerably situational complexity, causing players to contemplate risks and make assessments on both offense and defense.

Calibrating both decks toward an even matchup did not seem far-fetched. It seemed like it could be done, but making the matchup worth playing over and over again would require diversifying the card pool, and including a larger number of singletons such that the experience would be worthwhile. But this could be accomplished without fundamentally changing the concept.

In general, I think such “Gimmick” decks can be built with the following parameters:

While the Alpha Card pool offers a limited number of options for these kinds of “gimmick decks”, they are fun as hell to build and try out. I would love to try this approach for other sets, perhaps like Arabian Nights (although Kird Ape might be a problem), and see what other interesting concepts may be possible.

Down the road, I would even perhaps enjoy playing a modern Magic constructed format along these lines. The synergies and play patterns possibilities that emerge from lifting the 4-card cap are something that is definitely worth exploring.