by West on September 5, 2019 in Articles, Old School Magic, Report

The Old School Player’s Ball weekend is my favorite out of the year. Bob, Jaco, Moss, and company consistently produce several unforgettable days every August. For my money, it is the gold standard. The only thing that could have made it better is some missing folks like Charlie (the only person I know these days who can still do a 360 flip on a skateboard), Cam, DFB, Mano, the rest of the SoCal Deep Spawners, and many others who were missed. The weekend ends up being a whirlwind with little sleep, so here is a brief report with the highlights that still happen to be living in my working memory (apologies to anyone I forgot to mention!).

After flying into Chicago on Friday morning and catching up with Jaco, we head over to the Lords’ informal Contracts II: Cirrhotic Boogaloo event. I am spoiled with a bear hug from Shaman Ben and meet Tom Hagen, who is a damn joy to talk to. I reunite with my bro Brian Urbano; there are older friends, newer friends, and lots of Chaos Orb flips. The rule is that when you leave, you must announce what card you would like from the signed pile of goodies contributed to the event. Then anyone else is free to challenge you to a Chaos Orb flip-off for that card. No one leaves empty-handed. I miss on my flip for an Orgg on the first time around, but manage to score it on the second round. Only Carter Petray has the guts to try to finger-kick his Orb over his beer to win a card.

Jaco, Jimmy McCarthy, and I wait for Urza’s chalice-holder and crack-shot-with-a-fire poker Will Magrann to arrive before we head to Jaco’s domicile. We stay up way too late allegedly discussing Invoke Prejudice while I sleepily try to decide what deck I am going to play in the Ball. I entertain the idea of flipping a coin to decide between a Dreams Combo deck (with four Juzam Djinns in the sideboard) and my longtime-love Story Time (with four Shahrazads in the main). Will calls heads for Dreams and the coin lands heads, but I go to sleep thinking I don’t feel great about the outcome. Further, I don’t think there is a law (legal, natural, or moral) saying I must go against what is in my heart. The coin don’t have no say, it’s just me. I sleep on it.

Saturday morning comes way too soon and we head to Uncle Mike’s Place for a Filipino breakfast. We then get to Revolution Brewing for the event and the first person I see is my brother Dane, who recently found a home among the Northern Paladins in Minnesota. He tells me a project manifested in the car ride on the way to Chicago that calls itself Dane’s Inferno. It is bonkers—every round, he intends to thrust his opponent into an interactive narrative in which one drinks full and descends into hell. His opponents can win prizes depending on the conditions met throughout the narrative, and there is a dramatic reading for each condition. If he plays a Mana Flare (“Gluttony”), something happens. If he plays a Candelabra (“Greed”), something else happens. I can’t remember if Rasputin Dreamweaver was supposed to be Virgil or Dante, but either way I am blown away. I furtively mention that if he doesn’t get recognized for Most Creative, I will start a riot. There are Librarians here and this is a potential beachhead for literature. Or an anthill we could happily die on.

At the last minute, I decide to play Story Time for the second year in a row. Shahrazad is restricted for who knows what reason in various places, but damnit I am here to play four of my favorite card. It’s probably safe to say that Shahrazad is in the top 3 least understood (and eminently fun and playable) cards in the 93/94 card pool. I often remind myself that progress can be slow; it took us a long time to recognize that bloodletting is medically inefficacious, and even longer to learn how Chains of Mephistopheles works. So why is Shahrazad my favorite card? In a word, flavor. There is no better card flavor-wise. Like its thematic namesake, the card produces a new narrative while life hangs in the balance. Concerning gameplay and mechanics, it does things I can’t achieve with almost any other card in the format. At some point, I’ll write something on the more technical considerations that come up while playing Shahrazad. And of course, there will be jokers—who are doing nothing wrong—who use the card to stall games to Chaos Orb flips (assuming there are no draws, per EC rules), but Stasis, Divine Intervention, and other candidates often produce the exact same result, and are played far more frequently. But moving past that, consider the fact that Ivory Tower often allows combo or control decks to gain enough life to recede far out of harm’s way. Shahrazad often provides an interesting gambit that makes those games winnable if you’re playing it in an aggro shell. And in certain situations, Shahrazad is a massively satisfying burn spell staked on a sub-game against decks with fewer win conditions (an advantage particularly when an opponent’s win condition[s] or key restricted cards are in the super-game). On the one hand, I probably get to play more games of Magic than anyone else on any day that I play Shahrazad. On the other hand, it has a tendency to produce satisfyingly fun games and outcomes. Each sub-game is a story, and that is something. 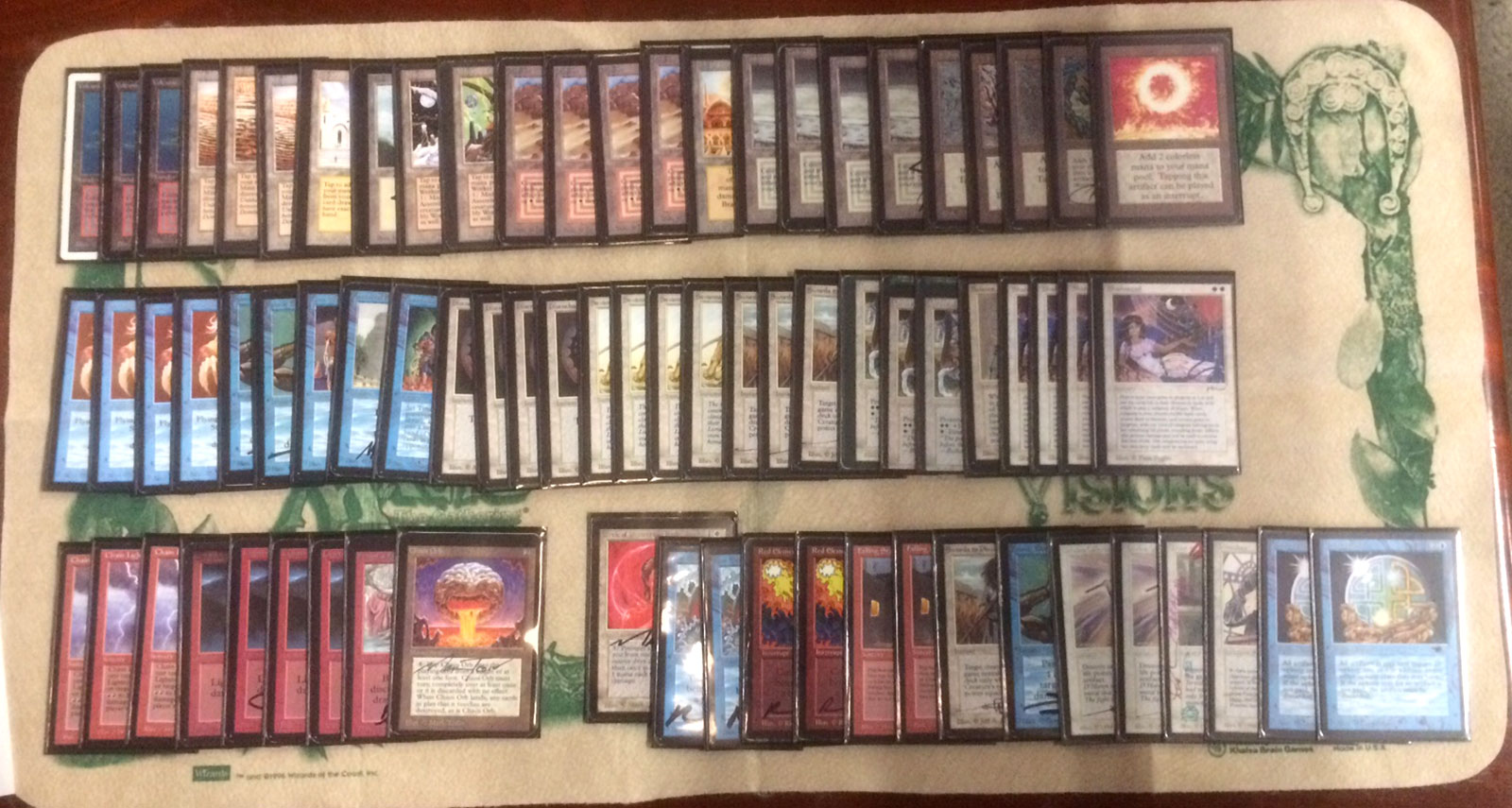 If you’re going to try Shahrazad, you only need people willing to play games of Magic. That shouldn’t be too hard. But the following convention might make the initiation ritual easier: when you transition to the sub-game, arrange the cards that will remain in the super-game into perpendicular piles (see images below). This makes it easier to return to the original game state when you finish the sub-game. 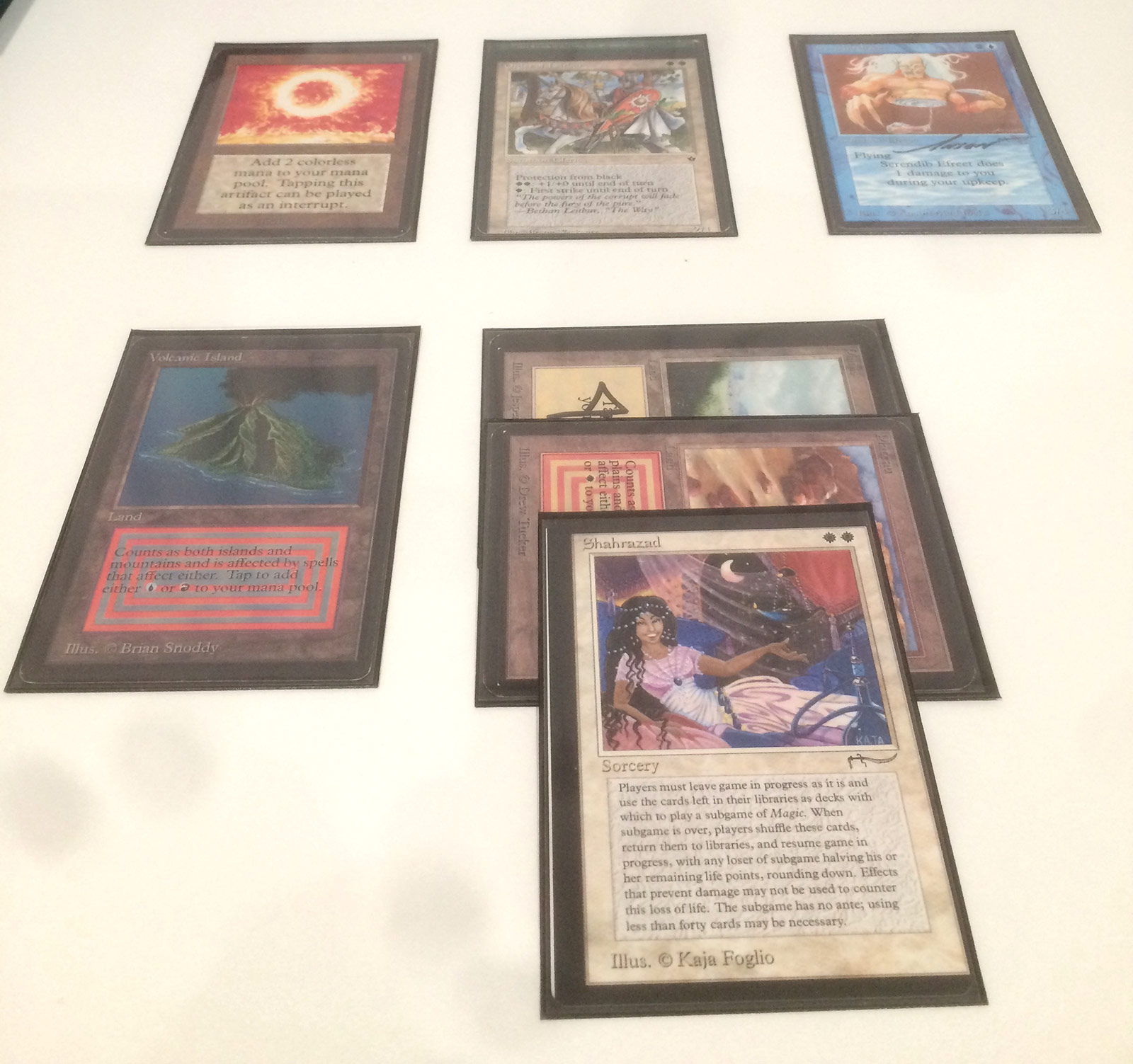 Shahrazad on the Stack 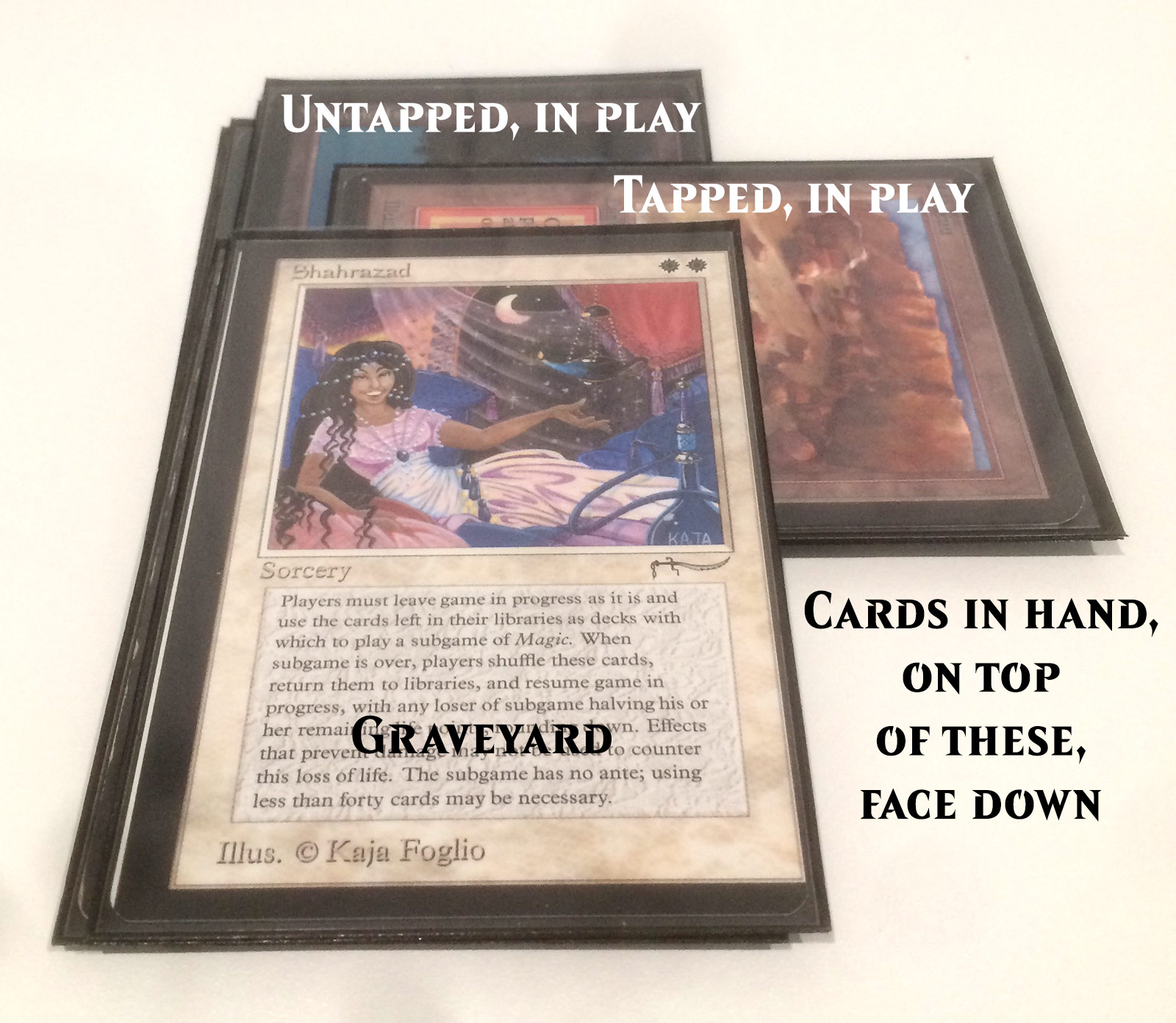 At the Ball I played with people from 8 states in 8 rounds. Some were familiar faces—shout out to Dominic on a dope tempo Stasis deck, whom I spotted on James Easteppe’s playmat before I saw him in the flesh—and many will be familiar next year, I hope. Bill S played a sweet Hurkyl’s Recall combo deck that greased you with Fireballs. Mox Emerald Scott was on a pure Goblins build. Jimmy played Fallen Empires on hard mode (i.e. Black-Red Derelor without Hymn). Matt S, despite playing The Deck, was extremely fun and interesting to play with. Michael Scheffenacker dropped an elbow on my undefeated streak in the last round in 3 games (as an aside, Control Magic on Preacher is thematically hilarious). And there was Andy Baquero in round 7. What can I say? Andy Baquero is basically Dwayne “The Rock” Johnson with charisma. And he plays Petra Sphinx and Personal Incarnation. Get on his level.

And speaking of levels, I frequently see discussions in public venues concerning different kinds of attitudes with which one might approach the game. Some attitudes can clearly undermine the kind of community many of us have grown to love. But interestingly, I don’t think this has led to any sort of mono-culture at events such as the Old School Player’s Ball, the SoCal Deep Spawners’ Risk, Eternal Central’s Eternal Weekend event, and the like. I love that the community produces an environment in which I get to sit next to and share games with doctors, blue collar steel workers, academics, and vegans. I like that I get to joke around with a temporary stranger during one round, reminisce with a bud in another, and even to occasionally put on my serious game-face in another still if the opponent prefers cosplaying as a Stoic.

In the end, Dane did win the “Most Creative” prize. The riot was cancelled. And I managed to take first in the Swiss for the second year in a row. 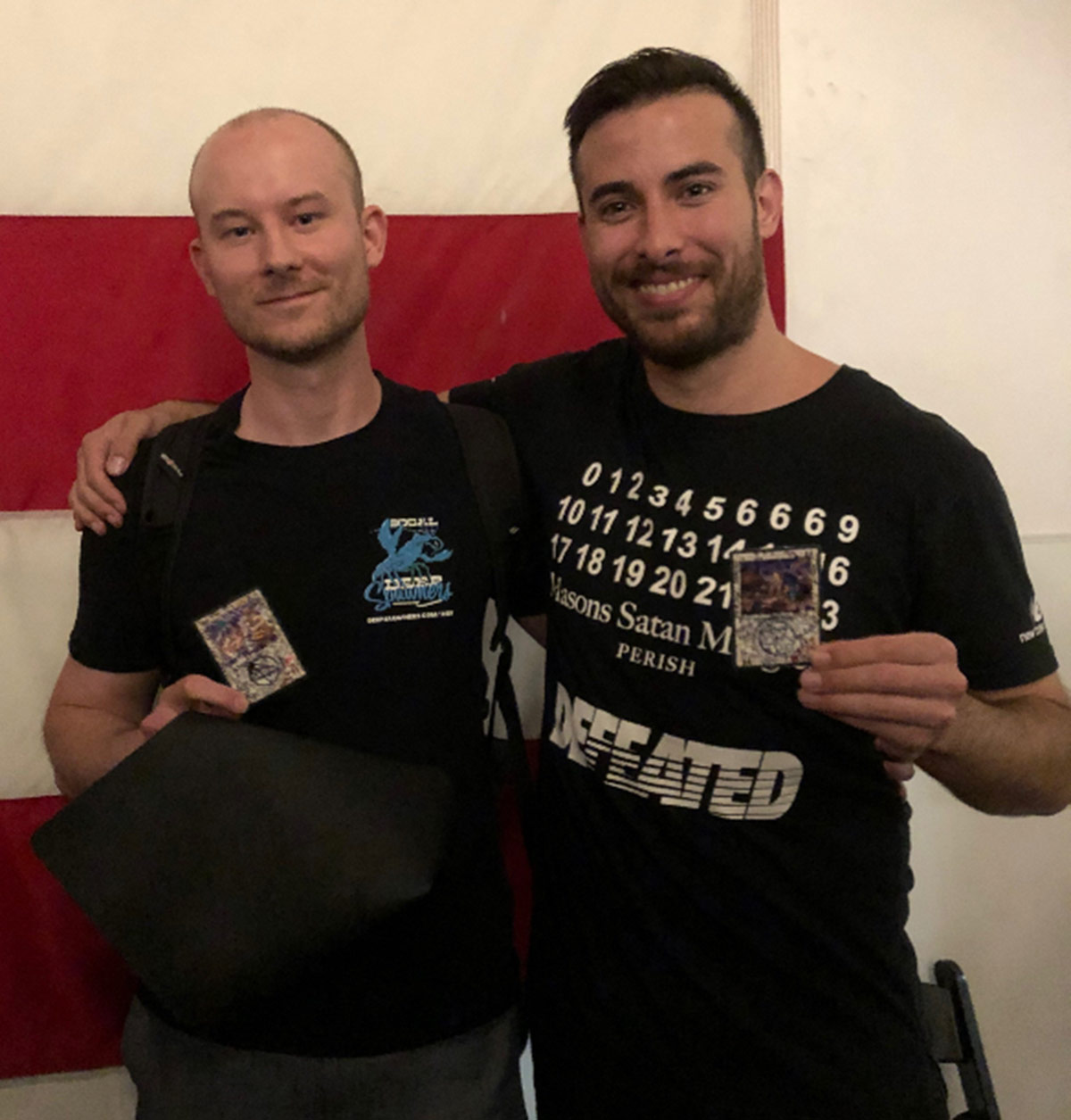 Winner of the Swiss West, with Winner of Most Creative Dane Malone 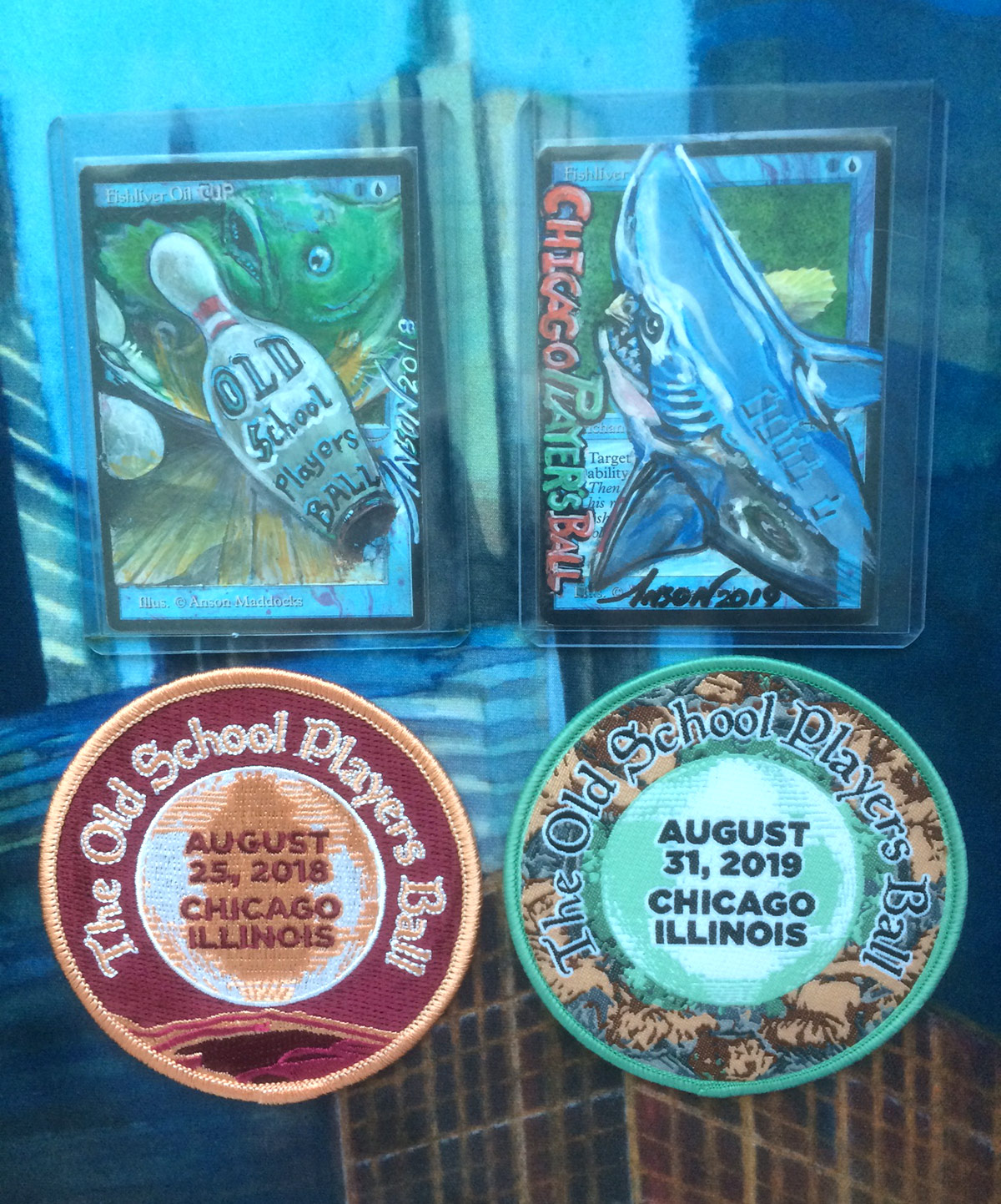