In episode 48, Geoff Moes (@ThallidTosser on Twitter) and Nat Moes (@GrandpaBelcher) talk with Joe Dyer (@volrathxp) about the effect of modal double-face cards in combo decks. Joe is THE Vintage and Legacy correspondent to follow, with great weekly strategy and format articles at MTGGoldfish.

What Can Lands Do for You?

If you’ve listened to this podcast before, you’re probably aware that we have a bit of an interest in (or obsession with?) Goblin Charbelcher decks. From 2007 until 2010 or so, I played almost exclusively Belcher in Vintage. Goldfishing alone, I did a lot of work on that deck to make it a fast, effective weapon, especially good at taking advantage of opponents’ stumbles or setup starts.

That was an important period for Belcher because three new cards debuted that revolutionized the archetype: Rite of Flame in Coldsnap (2006), Empty the Warrens in Time Spiral (2006), and Simian Spirit Guide in Planar Chaos (2007). Two +1 mana sources and an additional, cheap, orthogonal win condition that fit next to Goblin Charbelcher in what the deck was already trying to do. They let the deck simplify its mana base and, with the later unrestriction of Chrome Mox, eventually let Vintage players cut Land Grants and lands altogether, so a Belcher activation was always guaranteed lethal and you didn’t have to show your hand to your opponent.

These same cards and developments carried the deck into Legacy as well, with a similar red-green build. Without the additional power cards, and to take advantage of unrestricted Lion’s Eye Diamond, that deck often made use of Burning Wish as an additional win condition, but the idea is the same. It’s surprisingly easy to switch from Vintage to Legacy by just increasing the counts of restricted cards and cutting banned cards.

When Zendikar Rising recently introduced the modal double-face cards (MDFCs), it felt like the same kind of watershed moment. Does this change everything?

My initial reaction was skepticism. Why play a card that’s really only a land in the best case, a Chrome Mox imprint in the second best case, and unplayable in the worst case? There was also something anathema to me about playing lands in Belcher, but tradition isn’t a good reason to not play good cards. After some consideration, though, I realized that lands are very good in this type of deck. Most cards in the deck—Rite of Flame, Tinder Wall, a Mox, and so on—are simply plus-one mana, the same as a land. And lands have the benefit of being uncounterable and also permanent. They don’t build storm for Empty the Warrens, but neither do Spirit Guides.

Finding the right balance of MDFC lands to provide mana, imprint extras on Chrome Mox, and not hurt storm too much would be great. In the above list, switching 4 Desperate Ritual for 4 Shatterskull Smashing (Shatterskull, the Hammer Pass) and 2 Pyretic Ritual for 2 Turntimber Symbiosis (Turntimber, Serpentine Wood) seems totally reasonable, within two or three cards. I don’t think you want any lands that enter the battlefield tapped, for example.

But there’s another version of Vintage Belcher that doesn’t rely on storm, and it could really use an additional source of black mana.

I’ve played a version similar to the above (without the MDFCs, of course). It’s more all-or-nothing than the red-green version above, which has very consistent mana. BuRGr Belcher aggressively goes for Goblin Charbelcher, using Dark Ritual to fuel bigger plays, including tutors and explosive draw-sevens. The thing missing from previous versions was consistent access to the right colors of mana, since your starts come from green Tinder Wall, red Rite of Flame, or black Dark Rituals and try to make other colors happen from there. Adding more free, uncounterable mana should be a boon to this build, and having permanent mana sources means it is easier to activate a turn-one Belcher on turn two if necessary. I look forward to testing something like this as a much-improved version of its predecessor.

Joe helps us talk about playing Oops, All Spells, another combo deck that can’t have lands and doesn’t need storm but does need consistent access to the right colors of mana. Joe wrote about this list in one of his recent articles.

Oops, All Spells, by yashimoro

I haven’t played Oops, All Spells in Vintage, but having played it in Legacy, the hardest part of mulliganing hands was trying to get the first black mana to pay for Dark Ritual. Even adding just Agadeem’s Awakening (Agadeem, the Undercrypt) to the list will be a huge help there. This list also looks like it might be happy to play a couple of lands and have a setup turn where it plays a draw spell or tutor. I still recommend Stephen Menendian’s exploration of the archetype for how to build and play a list in both Vintage and Legacy. Even with the new technology, the bases are the same.

Getting to four mana with a turn-one, landless, combo deck is tantamount to victory, as even Empty the Warrens tokens or Goblin Charbelcher waiting for activation mana will win the game soon enough, to say nothing of Balustrade Spy and Undercity Informer. However, these are still very much glass cannons. Belcher loses to counterspells and Null Rod, and Oops, All Spells loses additionally to graveyard hate. The pilot of these decks knows they have to make their opponent have an answer, but they also know an answer frequently means a loss.

Building these decks means making tradeoffs between more powerful cards, more reliable mana, and more protection like Goblin Welder, Veil of Summer, or counterspells. As better examples in these categories are printed (Veil of Summer coming out last year was huge), these decks will get stronger and stronger. The MDFCs are going to be big here. As I mentioned on the show, I think there’s going to be more done with them than what we’ve seen here.

Joe recommended a new restaurant in the Dayton, Ohio area: Myracles Bar and Grill. It sounds pretty good, particularly the idea of specialty egg rolls with different flavors. I’m a fan of bar food in general, and I notice they have $4.29 baked beans, so those have to be amazing, right? Anyway, good luck to them opening in the middle of a pandemic. Someday, perhaps, Team Serious will make it out there and dine as a group once again.

Geoff talked about his recent trip to his family’s undisclosed location on the coast of Maine. The cabin is rustic, but it has access to local lobster and a beach, from which it is possible to harvest oysters, at least for now. There’s lots of good talk about fresh and not-so-fresh seafood. I recommended Taylor Shellfish in Seattle, where they will help the uninitiated learn about shellfish and will sell you a geoduck (pronounced “gooeyduck”), which looks like this: 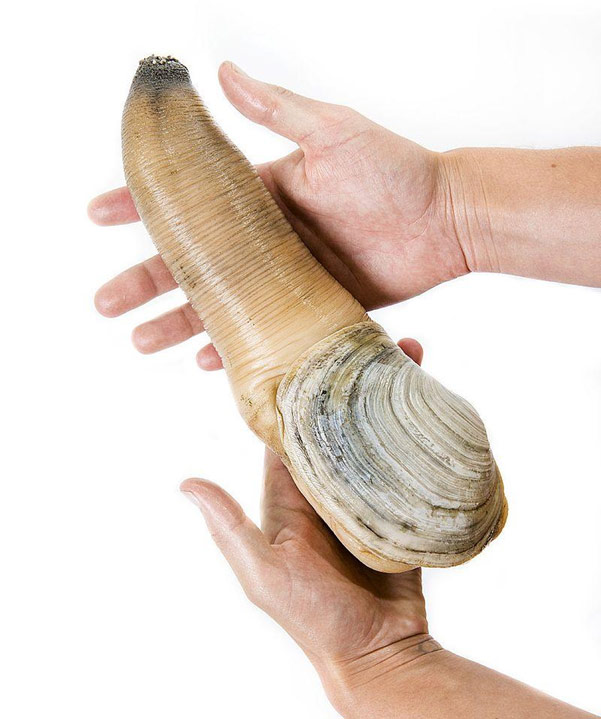 And now we can provide the recipe mentioned in the show for oyster crisp, which sounds pretty good if you can get the oysters. Definitely cook them if you’re unsure of their origin.

Salt and pepper the oysters and layer with the other ingredients in a 9×13 inch baking dish. Bake uncovered at 400 degrees for at least 20 minutes, or until top is brown and bubbly.

We didn’t get a chance to talk about this on the show because it hadn’t been announced yet. Eternal Weekend is going to be an online affair this year (thanks, coronavirus), but that means there’s more opportunities to win as there are still three paintings to give away. Everything is organized on MTGO by Wizards, so details are all online here. The basics are that an MTGO account is required, it’s $25 to enter, and there are three events for three different paintings:
● Saturday, October 24, at 12:00 AM PDT (Tolarian Academy)
● Saturday, October 24, at 2:00 PM PDT (Library of Alexandria)
● Sunday, October 25, at 8:00 AM PDT (Mishra’s Workshop)

Good luck! I hope you win on turn one a lot.

Is it wrong to play lands in Belcher at all? What if you play 15 lands, but they’re all in your sideboard? Should Oops, All Spells get a different name now that it has lands in it? Should it have gotten a different name anyway? Is Oops, All Berries a good cereal? I don’t think so. Crunch Berries have a weird flavor, kind of perfumy. I’m not a fan. Oops, All Oyster Crisp might be a better cereal. Oops, All Geoduck.

Thanks again to Joe Dyer for being our guest for this episode! Don’t forget to follow him on Twitter and check out his articles on MTGGoldfish. Life has been stressful and weird lately with, you know, disease and injustice and whatever is going on in Washington, D.C. lately. Sheesh. Thank you for spending some of your time with us. We at Serious Vintage encourage you to be safe, and also to vote. We’ll look forward to any questions or comments here or The Mana Drain or on Twitter. You can also email us at seriousvintagepodcast@gmail.com.