For episode 44, Geoff Moes (@ThallidTosser on Twitter), Nat Moes (@GrandpaBelcher), and Josh Chapple (@joshchapple) join David P. Baum, longtime owner of a card and comic book store in Northern Ohio. He doesn’t have a personal Twitter account, but (Pop! the store has one, as well as a Facebook page and Discord, if you’re interested.

Who Is David P. Baum?

We’ve talked about how hobby store owners need to focus on the store as a business rather, than as a hangout, so it can be challenging for someone who has fun with Magic: The Game to have it become Managing: The Gathering. But I believe Dave is an entrepreneur at heart. He’s not out to take advantage of customers to make money. He’s always been unassuming, welcoming, and respectful towards his customers, great at making connections, and being helpful beyond the normal cash register transaction. Instead he’s trying to create a better experience for customers, knowing that the money will come along with that.

So far it’s seemed to work out. Thinking about it, I’ve been to shops he’s owned in eight different locations: five in Sandusky under two different names, and others in Huron, Port Clinton, and Bowling Green. When one has closed it’s been mostly on David’s terms, and when one opens it’s with foresight and the hope that it will be an improvement on the last. He’s been able to work solely as a game-store owner for a long time.

For some members of Team Serious, Dave has been a part of our lives for many years. I’m 37 now and have been going to his stores since I was in high school, at least 20 years. He comes out to dinner with us after events and I’ve been to his house to play board games. He was at my wedding, and then last year was at the tournament and diaper party we had to celebrate the birth of our first child. I guess this is just a personal recommendation on Dave to go along with his years of experience as a Magic: The Gathering tournament organizer and store owner. He’s a great guy and valued member of the community, no matter what he says.

What Happened – Part I

My plan for this episode worked perfectly. I know that Dave’s a good talker and storyteller, so it was easy to just kind of turn him loose. We ended up with more than two hours of recorded audio that just happened to be pretty neatly divided between “The Early Days of Tournament Magic” and “What It’s Like to Own a Store.” So you’ll get more Dave soon!

This first part contains a chronology of the beginnings of tournament Magic, from Dave’s perspective:
● Dave gets his first boxes of Unlimited from a sports card dealer and sells them at a little sports card convention without knowing what they are. He opens some starters and “auctions” some singles, including Demonic Tutor. Did he sell a Black Lotus?
● He takes some of the cards home, learns to play, and becomes engrossed. He gets a Shivan Dragon.
● At another sports card show, Dave organizes probably the first Magic tournament in Northern Ohio, maybe one of the first tournaments ever.
● When Magic was still fresh and new, starting in 1995 or so, Dave and his brother and some friends organize a circuit of tournaments in Northern Ohio that they call the Grand Prix. One of these includes an event at a golf resort in Huron that is my first tournament ever, where I played a team event with future Pro Tour player Tim Aten. Tim and I were in the same class in high school, and on the same quiz team if you’re familiar with his Jeopardy! appearances. He was also coincidentally the Magic editor I replaced when I got hired at Wizards. Vermilion High School class of 2000 was apparently good for Magic editors.
● They also organize SandCon in Sandusky, which Geoff and I attend to buy cards and not be competitive in tournaments. I play Icatian Moneychanger in a deck at one point. The early days of Magic have such primitive strategy and buying options compared to those we have now. Dave starts a “zine” to promote SandCon and no one really knows how to build a deck. 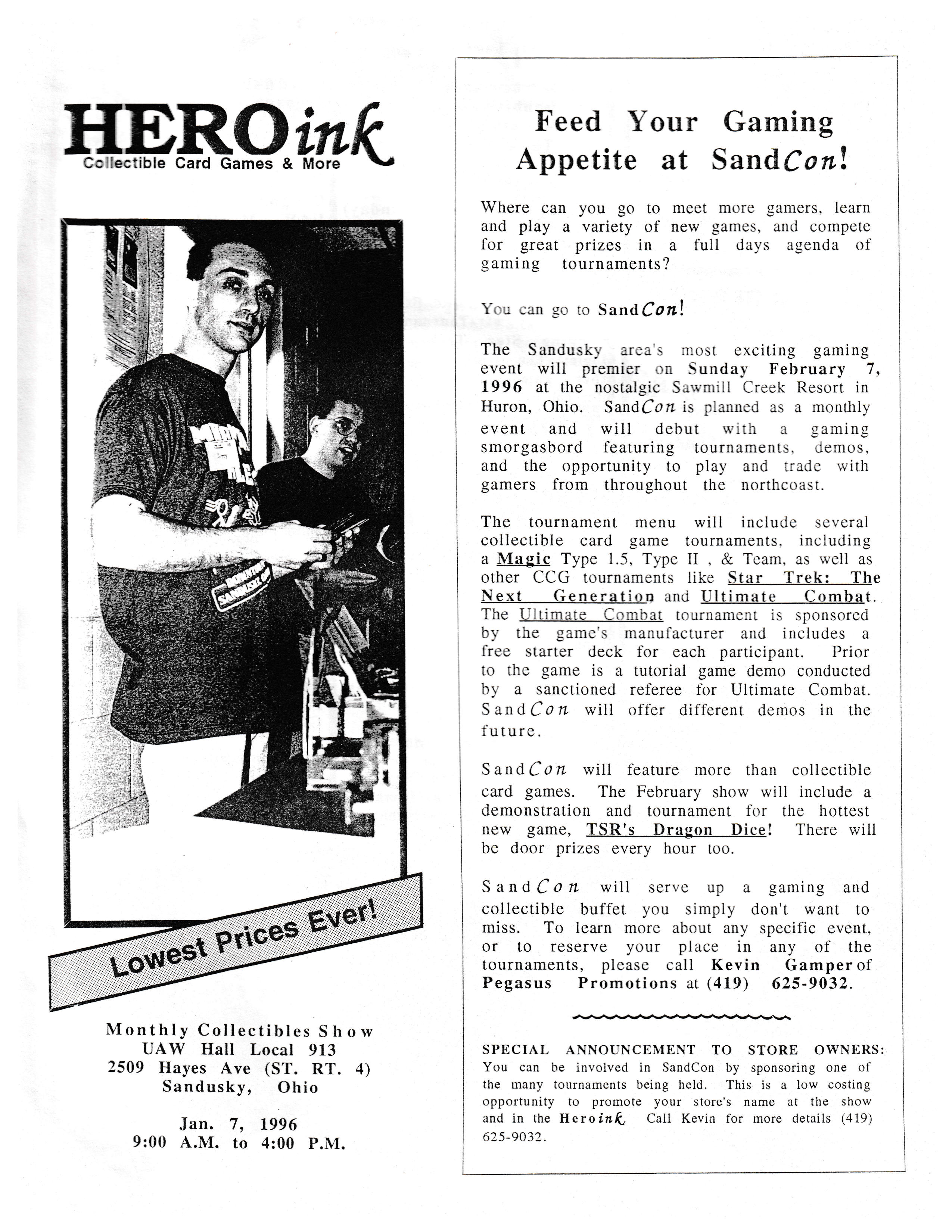 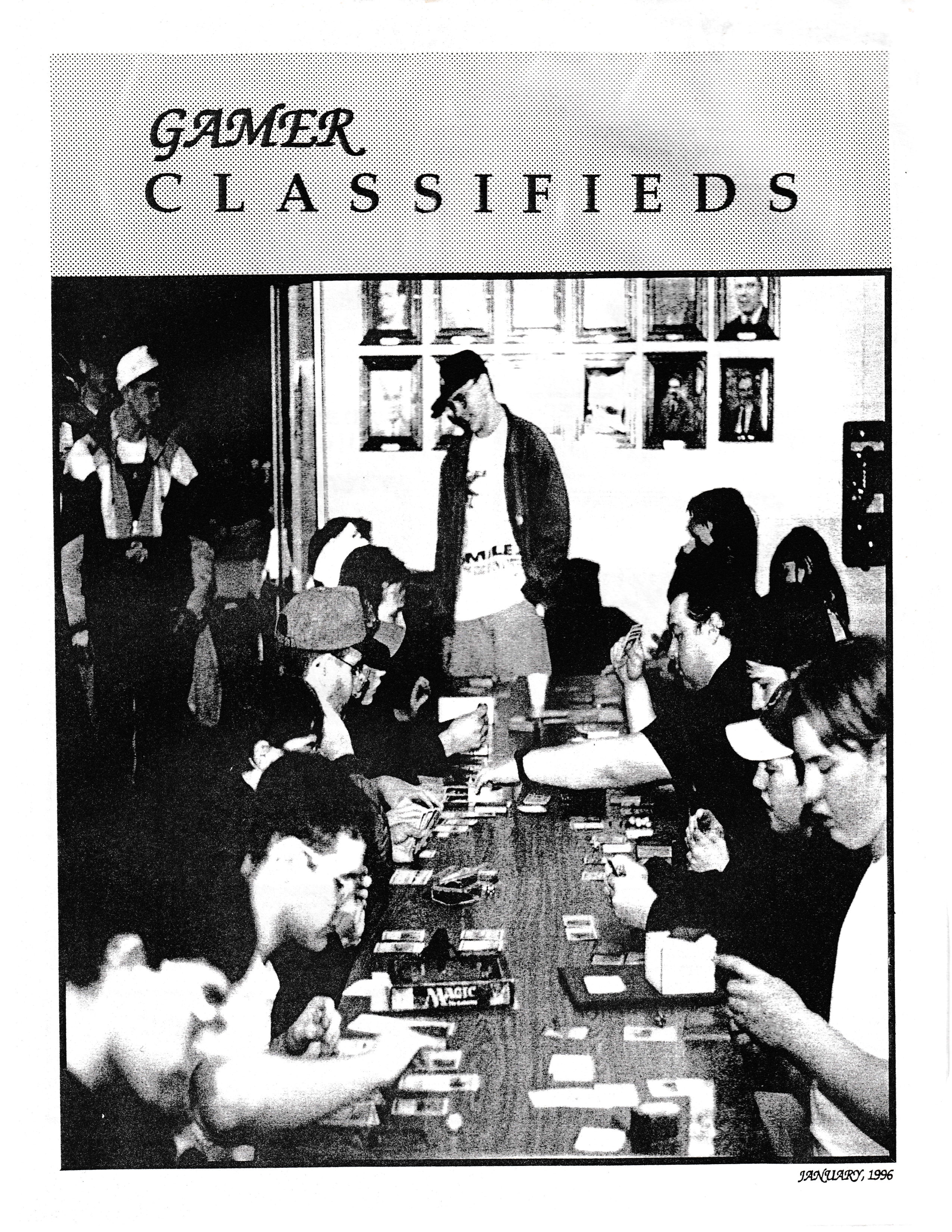 ● Dave runs the Chinese Fourth Edition release event at Origins. There’s no reference for any of the cards, so Dave makes a photocopied booklet to show what the cards do based on how they look. Two of the judges he brings down are Mike and Jeff Donais, both of whom eventually work in Wizards R&D and later go on to other game development jobs. Dave meets Richard Garfield, Peter Adkison, Brom, and other Magic luminaries.
● Magic weathers some of its early challenges, enters its first big growth period, and begins the Pro Tour in 1996, asking tournament organizers to bid to participate. Dave and his partners decline, and Dave takes a break from Magic entirely.

It covers a lot of time in Magic’s first big growth phase, up to and including some of the difficulties with Fallen Empires and Chronicles, and the Wild West days before everyone had constant information from the Internet. Prices were made up on the spot and the decks people built were largely terrible. Perhaps you remember the advice that 20 lands were enough? That has been wrong forever, but it was long-lasting as a baseline for deck construction.

Anyway, this is merely part one. Dave will continue in a second episode where he tells about running a store and some of the experiences surrounding that.

When did you start playing Magic? Did you ever go to a small “convention” with a bunch of vendors selling sports cards and a few people selling gaming cards? I remember going to one and buying a couple of Star Wars CCG starters. That was a mistake. I also remember buying $1 cards like Shapeshifter and Tetravus, which were fine but rare and I had never seen them before so I had no idea what they were worth. That was a weird thing too: “I’ve never seen this card so it must be good or worth a lot.”

Thanks for listening! And thanks to Dave for joining us on this special, two-part episode. We hope you enjoyed it and found it useful. Usually we talk a lot more about food. We’ll look forward to any questions or comments here or The Mana Drain or on Twitter. You can also email us at seriousvintagepodcast@gmail.com.