For episode 45, Geoff Moes (@ThallidTosser on Twitter), Nat Moes (@GrandpaBelcher), and Josh Chapple (@joshchapple) continue their discussion David P. Baum, longtime owner of a card and comic book store in Northern Ohio. He doesn’t have a personal Twitter account, but (Pop! the store has one. And if you’d like to support the store through the coronavirus quarantine, Pop! opened an online storefront to help get them through.

If You Missed Part 1

We talked with Dave about his role in organizing Magic in Ohio in 1994–1996 or so, from selling his first boxes of product without knowing at all what the game was about to organizing the local event Sand Con and the Chinese 4th Edition prerelease at Origins in Columbus in 1996. (We suspected it was 1995 in the episode, but Chinese 4th debuted the following year, and 1996 was the first year Origins moved permanently to Columbus. Consider this a correction.)

There was a lot. If you have an interest in the history of Magic: The Gathering, you should listen. It’s very fun! I admit at one point to playing Icatian Moneychanger.

When we left Dave, he had turned down an opportunity to bid on continuing to organize events for Wizards of the Coast. He sold out of the organizing business and out of Magic entirely.

This first part of this episode contains a chronology of the beginnings of tournament Magic, from Dave’s perspective:
● We talk a little about the awkwardness that Wizards went through in its growth period, namely Fallen Empires and Chronicles, from the perspective of a store owner at that time as well as from the players at that time.
● From there we talk about Magic economics in general in those days, including the challenges of finding particular cards or finding someone to trade with you or finding an accurate representation of pricing. The Internet was still in its infancy and paper price guides were out of date as soon as they were printed.
● And we talk about everyone’s favorite topic, the Reserved List! We solve no problems and make no wild claims. You’ll be disappointed. 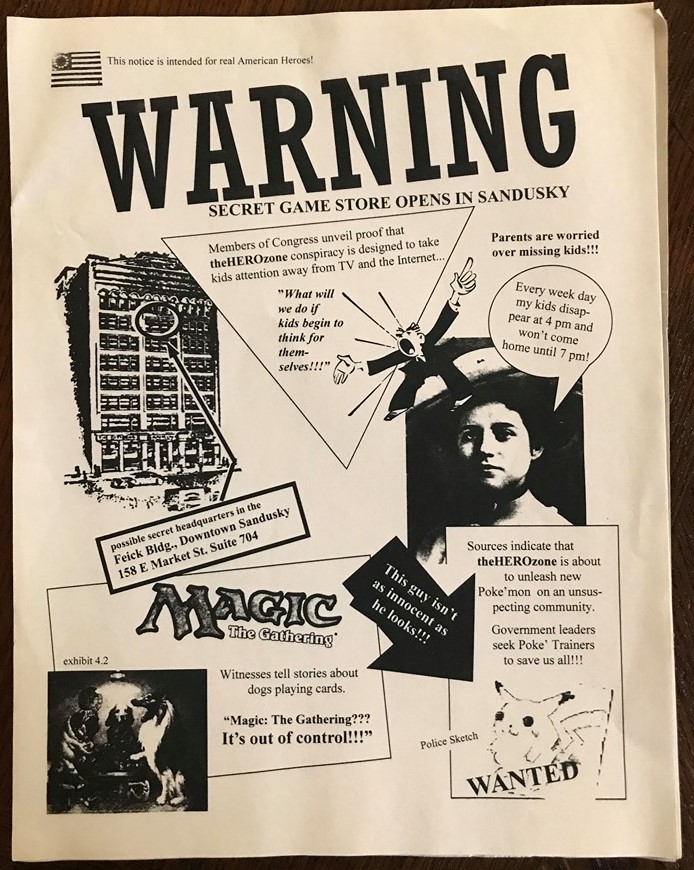 ● Finally in 2000 Dave opens a small store on an upper story of an old building in Sandusky, Ohio (the one on the flyer). This includes a pretty interesting recollection of 9/11 and the store’s strange position as a refuge, of sorts, for the local kids who were around after school amid the turmoil of this unique situation. This compels him to move to a more customer-friendly location.
● Josh’s mom goes to the store and scopes it out for us. Josh is impressed in hindsight that his mom is that in tune with what the kids might like.
● Dave tells us about the store’s first robbery! And getting a new landlord, because, wow.
● The wheel keeps turning and the store moves again, gets sold, and opens anew. Dave talks about the risks of selling online and why he hadn’t done it in the past. As I mentioned, these unique times have changed that. They’re online now.
● We talk about the death of Magic, in relation to the death of model railroading.

And we close with some of the intangible benefits (and also potential drawbacks) of owning a store. Dave has been running Magic events for a quarter century. At this point he’s seen a couple of generations of players grow up, and he’s had a very real effect on them. Magic is a lifestyle game, but everyone experiences it differently, and everyone who experiences it has a different life that this game fits into somehow. We, as players, even as long-time players, don’t really think about that, but it’s pretty remarkable. Magic is over 25 years old.

Dave predicts that Magic will survive even another catastrophic event, “like World War II.” And here we are in a global pandemic that has disallowed the gathering part of Magic: The Gathering. Listening to this now, after recording it before quarantine events began, it’s a little strange. Where does the game go from here? Where do we go?

Local game stores like Dave’s are being hit particularly hard by the coronavirus quarantine since they can’t bring players in for events, and thus can’t as easily sell sealed product, single cards, or even snacks and drinks. So the only question this week is what are you doing for your local game store, especially after they’ve done so much for you. Times are tough, but consider doing what’s reasonable for you.

If you want to support Dave’s store, Pop!, they have a new online storefront that will hopefully carry them through the troubled times. I’m sure they’d appreciate the business.

Thanks again for listening! And thanks to Dave for joining us on this special, two-part episode. We hope you enjoyed it and found it useful. Usually we talk a lot more about food. We’ll look forward to any questions or comments here or The Mana Drain or on Twitter. You can also email us at seriousvintagepodcast@gmail.com.