The following changes outlined below are being made to Eternal Central’s recommended Banned and Restricted Lists for the Middle School format. All changes are going in to effect immediately as of this announcement (Friday, May 5, 2020), for all Eternal Central events moving forward.

One of the most powerful (and often problematic) effects in Magic’s history is the “tutoring” effect, allowing players to search up a wide range of cards. Mana efficiency and tutor targets have long been what determined how powerful a given tutor was, in a given card pool. 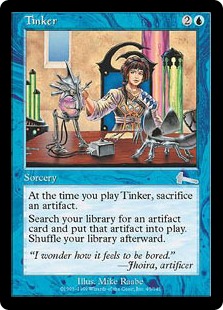 Tinker has a storied and potent history as being powerful, overly mana efficient, or downright broken, depending on the format and card pool it was included in. To some, it was one of the greatest design mistakes in Magic’s history, while to others, it was simply par for the course in the Urza’s block era of powerful effects (Time Spiral, Yawgmoth’s Bargain, Replenish, and so on).

So why would we ever unban Tinker in a format where it was previously banned? This is a complex answer, and there are a number of reasons, so let’s touch on the most important ones briefly.

Middle School is undoubtedly a high-powered format, allowing cards such as Necropotence, Survival of the Fittest, Oath of Druids, Aluren, Land Tax, Mystical Tutor, Metalworker, Hermit Druid, Recurring Nightmare, Entomb, and many more of the greatest hits from yesteryear. The card pool in Middle School is deep, and in our ongoing testing of Tinker over the past year we have found it roughly to be on par with the other strongest cards that are already allowable in the format.

Casting Tinker in Middle School is nothing like casting it in Vintage, but it undoubtedly does provide a powerful and mana efficient effect, given the card pool. With other powerful cards like Ancient Tomb, Mox Diamond, Grim Monolith, and Voltaic Key all unrestricted in Middle School, there are ample resources that naturally coincide with building around Tinker. The card pool that Tinker can fetch is somewhat underwhelming though compared to other historical formats, and puts it more on par with some of the most powerful cards and strategies already existing in Middle School.

While this does give blue decks another tool in the toolbox (or decks that would splash blue simply for Tinker), and somewhat incentivize people to play blue, the color of a card alone is not enough reason to justify its place on a Banned or Restricted List.

Tinker potentially allows for more options for deck designers, while still allowing compelling game play. That sentence may prove fateful, but we are willing to let the community at large test Tinker more thoroughly and put it through the metagame paces fully and openly. Just like any other card(s), we will continue to monitor this format and changes closely, and if Tinker proves to be problematic to the holistic health of the format, doing more harm than good, it will quickly be addressed again in the future.